THE FINEST ORMUS AVAILABLE IS HERE.

Discovery in Action Ormus "Buried in the Ground"*** is made only under a full moon or on the equinox and not collected at any other time.    It is buried within a heavy remote wilderness forest where it remains for 29 1/2 days gathering the earths energy.  Available here, pure, safe and  direct from the laboratory of Chris Emmons, registered pharmacist and author, Ormus Modern Day Alchemy. Certified to be safe, 100% organic, pure, and free of contaminants.

This is the  safest, most energetic, concentrated and powerful Ormus we know.
Batches sell out quickly never to be offered again.

Special Collection during the peak of the Harvest Moon. Buried in the ground for 30 days and returned to the laboratory for further processing. Now shipping. Very limited quantity.

Discovery in Action Ormus, "Buried in the Ground"

Our most powerful, Discovery in Action Ormus, "Buried in the Ground" Fall Equinox. NOW SHIPPING! Only made once a year. Sells out fast.

Q: Hey Chris! I would like to buy your Ormus. I just am clueless which to purchase…   K.

A: Hi K.  You ask for small differences, fine distinction among the Ormus choices.  And so, choose in this order, Spring Equinox, Fall Equinox, Full Moon Ormus.  Alchemists, throughout time, found that each of these time periods, in the same order, was a benefit to their Work.

Each choice delivers exceptional Ormus because I source each batch from nature from Nature material: Real, Mineral Seawater (Liquid), not re-hydrated processed sea salt.  Following ancient alchemical principles, every Ormus is then buried in the forest for one month. 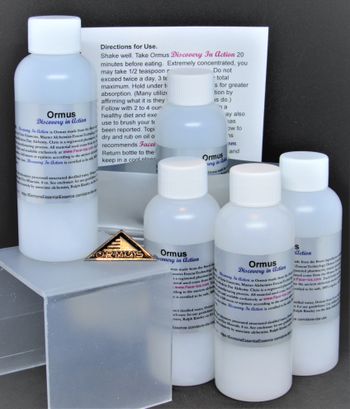 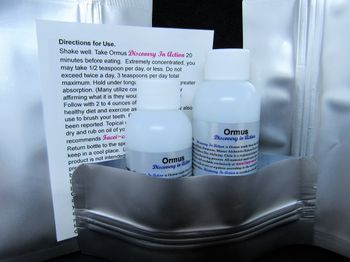